ALL.BIZ Tajikistan Tajikistan products Wood & Timber Equipment for working with wood Mill works equipment Equipment for the production of joiner articles The semi-automatic line for merging on Beaver 150/590B length 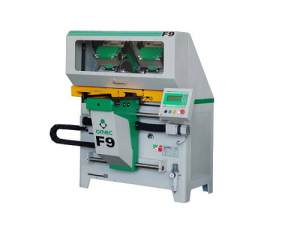 The semi-automatic line for merging on Beaver 150/590B length

71% of positive reviews from 14
12
12 years on Allbiz
Quickly responds
Technical characteristics
Description
The semi-automatic line for merging on Beaver 150/590B length
Maximum width of a package: 590 mm Maximum length of a lash: 1000 mm


The line of merging "-FJ-17" - is intended for merging of short-length whetstones on length and combines high extent of automation with simplicity of service and exclusive reliability. It is applied in joiner's and furniture productions to production of a glued board, pogonazhny products and a bar.

The line of merging on length of FJ-17 consists from:

On the line the following operations are carried out:

Machines automatically make a clip, a tortsovka and cutting of a thorn on the one hand. The system of pneumatic clips carries out reliable positioning of a package of preparations that excludes a possibility of a distortion of preparations and guarantees high precision of cutting of thorns.

The automatic on-off press for merging on length, makes an automatic set of preparations along with pressing. The press is equipped with a table with two working zones, hydraulic system of pressing of a lash and stepless adjustment of speed of giving. Preparations automatically move in a working zone of a press. In the first zone lamels in a lash are recruited. After assembly of a lash the tortsovochny saw automatically cuts off preparation of a given size.

The lash moves on the second position where in the programmed sequence pressing automatically is made: in the beginning the preliminary subpress from above and sideways, then the main effort from an end face is made. In the machine at the same time there is a collecting lamels in a lash (the first position) and pressing of a lash (the second position) that considerably increases productivity. Depending on lash section, the effort of pressing is regulated.

The received lash automatically faces on a reception table for preliminary endurance and polymerization of glue.

Such scheme of work allows to increase productivity considerably.

To Compare the Products
×