ALL.BIZ Tajikistan Tajikistan products Automatic machinery and equipment Units for gas, electricity, heat and water metering Natural gas meters Gas meters Node of measurement of an expense and amount of natural gas with quality control as a part of GIS 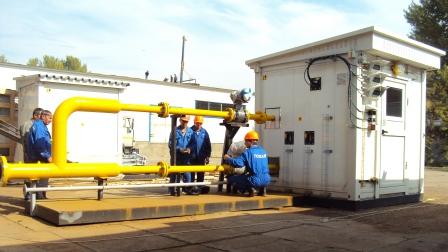 76% of positive reviews from 33
10
10 years on Allbiz
Quickly responds
Description
Are a part of a node of measurement of an expense of GIS:

The block of measuring pipelines includes in the structure:

As the main converter of an expense UZPR Flowsic 600 with straight sections of the measuring pipeline is used. Calculators of an expense "Superflou-21B", Floboss 107, Floboss 600, etc. complete with converters of pressure and thermoconverters are used to the definition of a volume expense and volume of gas specified to standard conditions. For the organization of duplicative system of calculation of a gas rate on each IT two sets of converters of pressure and converters of temperature with cross connection to calculators are used.
The block of quality control includes in the structure:

The SAU GIS software and hardware complex is placed in the block building of operator and includes in the structure:

To Compare the Products
×